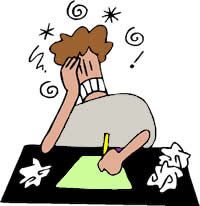 The Human Touch (in which a crazy-bad “system” is made less bad by a live, caring human being)

In November I’m going to be staffing a booth at New Jersey’s annual teacher’s convention to help promote our statewide virtual reference service QandANJ. A few months ago I filled out the necessary forms to reserve booth space on the exhibit floor in the Atlantic City Convention Center. Soon after, I was sent the “exhibitor’s manual” which included another myriad of forms to fill out. So many options! Do we want a table? How many? What size? A table drape? What color? Carpet? Plush? Regular? Color? Chairs? How many? Wastebasket? Do you want the booth vacuumed? How often? Do you want electricity? What kind? (yup, there’s different kinds.) Internet Access? Telephone? Help setting up the booth? Taking it down? Will you be sending boxes of stuff? To the warehouse? To the booth? Etc. Etc.

As it was, my morning was eaten up, my eyes were crossing, but there was a single saving grace: The exhibitor hotline. I had called the exhibitor hotline months ago when I first ordered the booth. In fact, I called it five times in one day (the initial forms I used to order the booth were no less confusing.) Each time I called, the phone was answered on the first ring by Kris. Kris was pleasant. Kris was helpful. Kris was friendly. When I called, I was feeling equal parts stressed, frustrated, and stupid. Kris talked to me like I wasn’t stupid. She comforted me and made it clear that I could call as often as I needed to. So I did.

Yesterday morning I renewed my contact with Kris. She was still there, picking up the phone after one ring with a friendly greeting, helping me figure out the forms and understand the ramifications of my choices. She even made a few phone calls to assure that I’d get the early-bird rate even though I was a few days past the deadline (“Oh, since this is your first time exhibiting…”)

So yes, the “system” sucked, and yes my eyes hurt, but in the end, to be honest, I felt fairly positive about the whole thing. Sure, I would have preferred a system that didn’t require me to interact with another human being (and I’m an extrovert). And I certainly would have preferred a system that didn’t take 3 hours of my time to communicate some relatively simple choices. But having a live person–a warm, caring, informed live person–available to help me gave a HUGE boost to my overall level of satisfaction.

So I ask: What happens when our customers need help? Whether it’s a reference question, a query about branch hours, or someone trying to find out what time storytime starts. Do they get a live person? Do they get an informed, warm, caring live person? Is the phone answered after one ring? Two rings? Five rings?

Kris was my escape valve. Ultimately it’s better to design our systems so we don’t need an escape valve. After all, what happens when Kris retires, or takes another job? Without her on the other end of the exhibitor hotline I would have been in hell. But even the best systems can only benefit from having an escape valve. A Kris who picks up after one ring. A human touch.

If asked to evaluate my experience as a prospective exhibitor at NJEA I’d give failing grades for convenience, but an A plus for the customer service I received from Kris. Overall, a solid B.