Would you like to be more creative?  Learn faster?  Super, all you need to do is… Nothing.

October 9, 2010 update:  Check out Bobbi Newman’s post on the connection between innovation and working less. 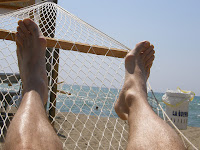 The New York Times reported this week that researchers at the University of California, San Francisco have found that rats don’t learn from experience until they take a break from the experience.  The break gives them time to process and create persistent memories.  Furthermore, the researchers believe that their findings almost certainly apply to the way humans learn. Uh oh…

Why uh oh?  Because many humans are increasingly connected to our ipads, blackberrys, smartphones, and laptops, keeping our brains engaged continually throughout the day.  And while all of that ubiquitous connectivity offers us the possibility of reaching heretofore unreachable levels of efficiency and productivity it seems that it might come at a price:  The Times reports that “when people keep their brains busy with digital input, they are forfeiting downtime that could allow them to better learn and remember information, or come up with new ideas. ”

Having recently started a new job, I can attest to the fact that there’s nothing like a silent drive or a brief nap to process and organize a great deal of new information.  My 45 minute commute home might be the most productive part of my day, as that’s where all of the sense-making is happening.  Strange as it may seem, sleeping has also been incredibly productive as I awake many mornings with a number of ideas synthesized from the previous day’s conversations, observations, and readings.

So as we come to the end of another summer and start getting geared up for the busier days of Fall let’s take a moment to remember:  There might be no better way to learn than by stopping, unplugging, and doing absolutely nothing.